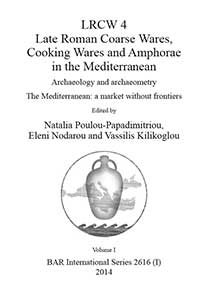 THE AMPHORAE IN THE ROMAN VILLA AT AIANO-TORRACCIA CHIUSI (SAN GIMIGNANO, SIENA-ITALY)

in LRCW 4. Late Roman Coarse Wares, Cooking Wares and Amphorae in the Mediterranean Archaeology and archaeometryThe Mediterranean: a market without frontiers. Edited by Natalia Poulou-Papadimitriou, Eleni Nodarou and Vassilis Kilikoglou. Volume I. BAR International Series 2616 (I) 2014.

Since 2005 a Belgian-Italian research team has undertaken an archaeological excavation on the site of a villa longinqua, a building erected between the late 3rd and the early 4th centuries AD. The research project was funded by the Université catholique de Louvain and was part of the international project VII Regio. Valdelsa during the Roman Age and late Antiquity. This site shows monumental features, and at the end of the 4th century AD underwent major restoration. It was then abandoned one century later, when it was ravaged and most of the marble building-material was taken away. Between the 6th and the 7th centuries AD, the site was occupied by craftsmen, who established several workshops for metal manufacturing (including iron, gold, lead and probably bronze), as well as glass and ceramics kilns. These craftsmen used the building material of the villa as raw materials. The majority of the amphorae recovered during the excavation dates between the beginning of the 5th century and the early 7th century AD, but only spatheia amphorae were found in layers dating to the period during which these objects were actually produced and circulated. All the other amphorae (and perhaps the spatheia also) might have been reused in the workshops. The shapes of these amphorae imply commercial contacts with Hispania and Africa, placing the villa within a Mediterranean trade network.